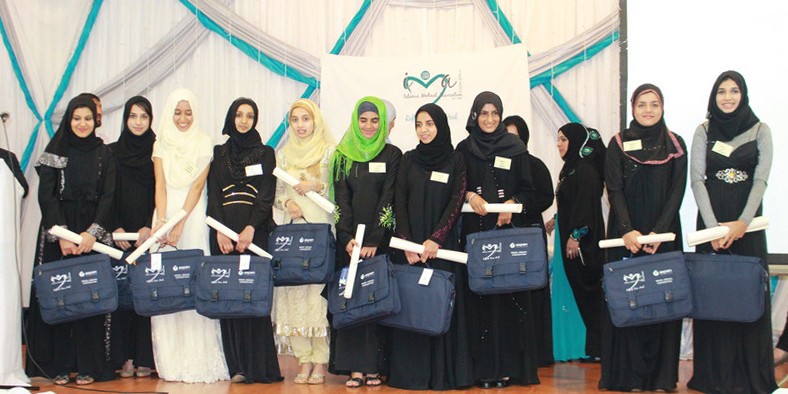 The annual IMASA Gradua on Dinner (JHB Branch) was held on 6 December 2014 at the Sultan Bahu Hall in Mayfair to a crowd of approximately 300 guests. The crowd was welcomed at the Registration Desk and the graduates were registered and presented with their gift packs, after which everyone was welcome to stroll around the exhibition stands of our various sponsors, including 27Four, Oasis, Pharma Q, Albaraka Bank, ABSA, Aspen and Mr Iqbal Omar.

The program was punctual and enlightening, with Dr Shoyab Wadee as the MC for the evening. The program began with a beautiful recitation of the quraan by Qari Yaeesh Ally, followed by an intuitive talk by our guest speaker Molana Sulaiman Moolla. Dr Ahmed Vachiat gave insight into IMASA JHB and what it has achieved, would like to achieve and its objectives in general, encouraging support from the new graduates as they enter the working world.

A scrumptious 3‐course meal was served during the course of the evening and tea tables were full of delectable with which to enjoy. Short talks on their companies/products were also presented by the main sponsors 27Four and Mr Iqbal Omar, following which came the honourary award and graduates ceremony – the highlights of the evening.

The Honourary Award was presented to Professor Rashid Bhika (TIBB), acknowledging his accomplishments and all that he has achieved and done for the community at large. Graduates were then called up on stage, congratulated and then guided through the Hippocratic Oath Taking, after which Dr Shoyab Wadee led them with some motivational thoughts to remember as they leaped into the next stage of their lives. The evening was concluded with a vote of thanks and short dua.