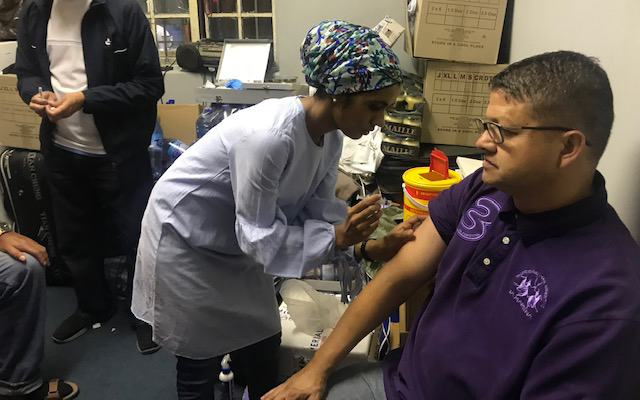 The IMASA has partnered with the Al-Waagah Islamic Institute for the Deaf in Cape Town in order to make the seemingly impossible dream of Umrah a reality. A number of volunteers have worked unselfishly and raised enough funds for the group of more than 50 hearing impaired to undertake this life-changing journey. The Hajj and Umrah organization Khidmatul Awaam facilitated a package that was very affordable and allowed a number of paying volunteers to also accompany and assist the group. The group will depart on the 02nd February 2019 and will spend a week each in the Holy cities of Madinah and Makkah. The Deen Channel, under Faizal Sayed, has committed to covering the tour from inception and will send regular updates from the Hijaz. Deen Channel was instrumental in raising awareness of the trip and contributed to the successful raising of funds. The Muslim Judicial Council (MJC) and Radio 786 also forwarded their support, amongst other organisations.

The Islamic Medical Association of South Africa [IMASA] was involved in preparing the group from a medical point of view. All the required vaccinations such as Yellow Fever and Meningitis was facilitated and funded by the IMASA. A vaccine day followed on the 09th December 2018 where the IMASA volunteers, counselled, inoculated and prepared the required documentation for the prospective travellers. Some of the group needed individual consultations and this was arranged with an interpreter at hand. The offensive word ‘dumb’ is often used for the speech impaired and it was quite revealing to the IMASA volunteers that the only ‘dumb’ people around were the ignorant lay people who were ‘deaf’ to the wonderful attributes that many of the travellers possessed.

The group consisted of members ranging from those who are profoundly deaf to the mildly hearing impaired. A number of them understand sign language and it is heartening to know that interpreters will be on the journey as well. Some do lip read whilst most can read and write. Strategies were devised to ensure that different means of communication existed in case problems arose. This entailed identifying pre-travel issues, inflight and overland transport factors as well as factors during Umrah itself.

One of the IMASA stalwarts, who has been a number of Hajj Medical missions as a nurse, has volunteered to join the group and offer her services in case medical issues arise. With her extensive knowledge of disease patterns in Saudi Arabia, she’ll indeed be an asset to the group. Medication will be provided by the IMASA to take along on the trip to be dispensed as the need arises, and IMASA doctors will be contactable 24 hours a day if needed. It is planned to follow up the group and get feedback on their expectations, perceptions and level of satisfaction with their Umrah. Their experience will Inshaa-Allah inform us on how to prepare and advise future travellers with similar backgrounds to derive the maximum benefit from the ultimate journeys in the lives of Muslims.